“Why Iceland?”  This is the most common statement you hear after uttering the words “we’re going to Iceland”.  Well, Kate has this friend with a bit of a Carrie Bradshaw complex (those of you with girlfriends know what I’m talking about), which is beside the point, but anyway, she was visiting over the summer and told us about a friend of her’s who works for Iceland Air selling travel packages to gullible Americans.  Apparently this year is supposed to be one of the very best in our lifetimes for viewing the Northern Lights, so Iceland Air is promoting it.  Kate’s long wanted to see this phenomenon and as a result of the 2008 financial crisis (which hit Iceland really hard) its currently cheaper to visit Icelend from the continental US than any North American destination where one might see the Aurora Borealis.

While the main purpose was to see the Northern Lights, Iceland is a really cool place with a lot of intriguing things to see.  Geologically speaking its absolutely fascinating, with volcanoes, continental rifts and plentiful glaciers (including Vatnijokull, the largest glacier in Europe).  Throw in countless waterfalls, rugged coastline and hot springs everywhere you look.

Of course, to see the Northern Lights you need to go in the winter.  The darker and colder (and further north) the better.  This limited our options somewhat, but due to its location near the Atlantic Gulf Stream, the island never gets terribly cold (the lowest temperature we experienced was about 20 deg F, in the middle of the night).  Day time temps were always between 32 and 40 degF.  The problem was the incessant wind.  If it was calm the place was downright tropical, but occasionally gail force winds made the outside completely unbearable.

The rock climbing is pretty limited and completely under the radar, but that is not for lack of stone (ice climbing on the other hand is pretty well established).  The island has boundless potential for new development, and I was kicking myself on multiple occasions for not bringing a light rack.  We had a rope and a handful of draws but no trad gear.  Most of the rock is volcanic choss but there are plenty of solid cliffs spread around for those with a discerning eye, and a I spotted a number of incredible features that I would love to climb some day (in the summer!).

Tempting sea stacks near Dyrholaey. I reckon the foremost would go at around 5.9 with bomber gear but some tricky choss to negotiate near the top.

The key to this trip was that Kate’s sister Kendall agreed to care for Logan while we were away.  Kate & I were very much looking forward to this aspect of the trip, and that is part of the reason we only went for four days.  This was our frist time away from Logan for more than 24 hours, so we were pretty psyched but a bit apprehensive.  But mostly psyched.

We took a 7-hour red eye from Denver direct to Keflavik, arriving in Iceland at 6am local time.  I had mapped out an extensive itinerary for each day in order to “maximize fun” as we like to say.  The first day was the most demanding, but I figured with the early start we would have more time than any other day.  I failed to account correctly for the darkness though.  The sun didn’t come up until 9:45, and even then you couldn’t really see all that well for another hour or so.

A rental car is pretty much a must, and they are really expensive; in the neighborhood of $100/day.  We opted for 4WD, which is probably a wise choice no matter the time of year.  There are icey roads all over the place in the winter, and numerous worthwhile dirt roads to explore in the summer.  Driving in Iceland can be somewhat treacherous, due primarily to the narrow roads and heinous weather.  All of the tourist guides go out of their way to warn travelers of the perils of driving, and the Iceland Air flight even had a special movie on Driving in Iceland, but we’re from Colorado so we know how to drive in bad weather 😉  By looking at off-brand companies I was able to get a nice 4wd Toyota Rav 4 for 10,500 ISK per day (about $80) including taxes and insurance.  By the way, this insurance is mandatory and almost worthless, it covers almost nothing except a total loss to the vehicle, in which case you still have to pay a $1500 deductable.  Driving on dirt roads or through water voids the insurance–good thing there is none of that in Iceland!

A look at Heckla, near where we almost totalled our car.

The plan for Day 1 was to basically follow “The Golden Circle” tourist route with a few added excursions.  The first really excitement came as the sun was rising and left Highway 1 (the major loop road that circumnavigates the island).  We had been buzzing along at 90 km/hr when our vehicles suddenly lost traction and we started fishtailing all over the road.  Apparently we had been driving on a sheet of ice for some time.  Once I got things under control we got out to see a solid 1/4″ layer of perfectly invisible ice covering everything; even the gravel on the side of the road was slippery to walk on. 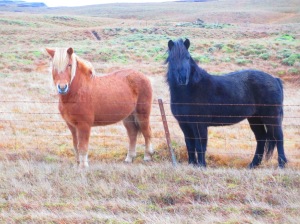 These burly horses thrive in some really awful weather.

This provided a good opportunity to check out a nearby heard of Icelandic horses.  These hearty steeds are quite a bit shorter than regular horses (but they aren’t ponies!), with wild manes that remind me of Mad Max mullets.  They are far more friendly than most horses, and have been pure bread in Iceland for more than 1100 years (the importing of horses to Iceland has been banned since 983 AD).  We were also just below Iceland’s most active volcano Heckla.  Europeans of the middle ages considered this peak to be quite literally one of two gateways to hell (the other being Stromboli in Italy) after a massive eruption in 1104 AD covered half the island in noxious ash. 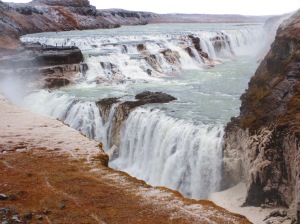 We proceeded northeast (at a much slower speed) past moon-like volcanic landscapes en route to the ancient Viking village of Stong.  This village was completed buried by the 1104 Heckla eruption, and was excavated a la Pompei in 1939 to reveal the only remaining turf homes from the Viking era.  We visited the worthwhile Hjalparfoss en route to the impressive Gulfoss (Golden falls).  This waterfall was the site of some early environmental activism when Sigridur Tomassdottir threatened to throw herself into the falls to prevent the construction of a dam in the early 1900’s.  The falls were very impressive, perhaps more so due to the crazy ice formations lining the canyon. 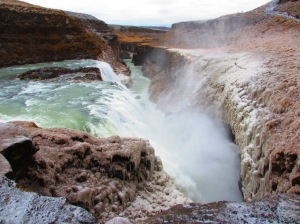 Some of the ice formations down-canyon.

Somewhere in there we stopped for gas and what turned out to be our best meal of the trip, a big loaf of fresh bread and a block of some type of sharp local cheese (I should mention gas is very expensive as well, around $7.50 a gallon!).  The next stop was “Geysir”, which is the root of the english word “geyser”.  This turned out to be about the least interesting of the three geothermal areas we visited in Iceland, but it did have an active geyser (“Srokkur”) that erupted every 5-10 minutes or so.  Frankly the geysers of Yellowstone are far more impressive than anything we saw in Iceland, but Iceland is special in that these sites are pretty much everywhere and its easy to have such a place to yourself, unlike Yellowstone.

The next and final stop for the day was Thingvellir National Park and UNESCO World Heritage Site.  Thingvellir is primarily revered for its historical significance as the site of the “Althing”, Iceland’s original parliment.  When Iceland was originally colonized in the 800’s, each Viking settler became the “Godar” (literally God, but more like lord) of his local lands.  After a few decades problems began to arrise between neighboring Godars, so they decided to assemble once each summer at Thingvellir (literally, “Fields of Parliment”).  This is assembly still exists today and is considered perhaps the longest running parliment in the history.

“Law Rock”, site of the Althing. The foreground is the Eurasian Plate, the cliffline is the edge of the North American Plate.

In addition to the  human history, the Logberk (“Law Rock” where the Althing convened) sits directly on the Mid-Atlantic Ridge (the divergent boundary of the North American and Eurasian tectonic plates).  The cool little canyon is growing at a rate of about 1″ per year, and the Oxararfoss waterfull tumbles into the Ridge, flows down it a while, then spills out.  The area is litered with cool little fissures and other signs of geologic activity. 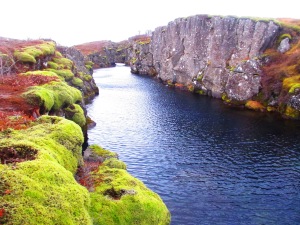 The Flosagja fissure is filled with glacial runoff and is a popular spot for SCUBA diving.

I found a nice clean section of basalt on the edge of the North American Plate and did some fun bouldering.  The rock was really nice but I assume the locals would frown on further exploitation by climbers.  One nice thing about visiting in November is that we had most places to ourselves.

Some fun bouldering on the eastern edge of the North American Plate.

Next we cruised into Reykjavik to check into our hotel. The trip package included lodging in an Iceland Air-owned hotel in Reykjavik, which was probably our biggest mistake.  If going to Iceland, there’s little reason to spend more than one or two nights in Reykjavik.  Best to spend the other time out in the country.  After a brief stop we decided to head to the Blue Lagoon, Iceland’s most famous hot spring.  This place is a Disney-style operation, with conveyer-belt style efficiency design to funnel heards of people in and out.  Fortunately there were only 30 or so other tourists there that night so it wasn’t a circus.  The minerals in the water give it a milky blue color, and are said to be really good for the skin.  Although the place is a bit of a travesty from an ecological perspective, it was a really fun, relaxing experience, and the pool is interesting with little bridges and waterfalls.

The Blue Lagoon, not as blurry in real life.

We got back to the hotel at about 8:30 pm, completely exhausted (having been awake for about 33 hours).  That’s about enough for Part 1, I promise to skip all the endless rambling about history in Part II.