A couple weeks ago I spent the weekend in California visiting one of my good friends and original climbing partners Chris Graham.  Chris recently moved to Sonora, which is ideally situated at the base of the Sierra range.  There’s an overwhelming amount of rock in this area, and not just the ubiquitous pristine Sierra granite.  Sonora is home to a number of excellent basalt crags, including the sport crags of Jailhouse Rock, Table Mountain, and Columns of the Giants, and one of the more unique bouldering areas around, a marble crag of sculpted fins known as “Columbia”.

However, since it was the dead of summer, with temps in the 90’s, all of those crags were out.  I was pysched to head up high and re-visit one of my favorite alpine playgrounds, Tuolumne Meadows.  Tuolumne offers the perfect combination of adventure and accessibility.  Many of the best crags are only a few minutes from the road, with quick approaches and straight-forward descents, making it easy to get a number of routes done in a single day.  It seems like no matter what route you end up on, its hard to have a bad day in Tuolumne.  Its just too beautiful!

Pywiack Dome from the road

The objective for the day was a pair of moderate classics that for some reason or another I had never gotten around to trying.  Pywiack Dome is one of the first prominent rock formations you notice if driving in from the west.  It sits right next to the road, and the base is actually 100-feet or so below the road, so you can look straight across at any climbers on the lower flanks.  I had driven by this dome countless times and always fixated on a striking series of dikes that zigzag up the West Face.

Me and Chris on Pywiack Dome.

The Dike Route has a reputation for extremely runout slab climbing.  For whatever reason I’ve always had a pretty good knack for that sort of thing, but I’ve found it requires the right kind of partner; someone you can trust in a tough situation, but also someone who keeps the mood light.  Extremely runout climbing is tense enough without a trembling belayer.  Chris was just such a partner, “Down for whatever” as Ice Cube* would say.

*Note to Generation Z: Ice Cube is the name of a hardcore gangster rapper. In the late 90’s he was abducted by aliens and given a lobotomy, and has since become the star of such hardcore children’s films as “Are We Done Yet?”

My old SuperTopo from 2001 calls this route the Bachar-Yerrian of 5.9 climbing, so I expected it to be a bit dicey.  Apparently the mental crux comes on the fourth pitch, where a reasonably protected 5.9 leads to 80 feet of 5.8 split by a single bolt.  Many folks fail to locate the key bolt, turning a hairy but survivable R-rated stretch into 5.8 X.  My plan was to find the bolt. 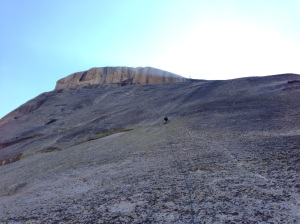 The route starts out with 120 feet of gearless 3rd/5.4 slab paddling to reach a nice stance.  The 100-foot second pitch had infinitely more protection: 1 bolt, located about halfway up the pitch.  This route was bolted on lead, presumably without hooks, so the bolts were few and generally located at hands-free stances.  The topo calls this pitch 5.6, and doesn’t mention any sort of crux at the top, but I found it to be the mental crux of the entire route.  Within spitting distance of the belay stance  the angle steepens just enough to make you doubt your rubber.  Either I was off route or something broke, but I had to do some very commiting friction moves literally 50-feet about the lone bolt.  This is the kind of situation where finger strength is useless; eventually it comes down to trust in your footwork. 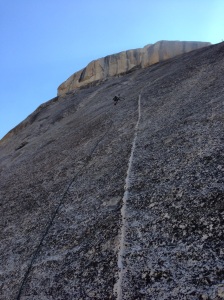 The second pitch, and the crux in my experience.

At the belay I contemplated how we would retreat if I had to chicken out on the 5.9 pitch.  Fortunately the 3rd pitch was essentially grid-bolted, with three bolts in 100-feet.  This was a really cool pitch, weaving between twin dikes.  At one point you “walk the dike” with your feet on the left dike and your hands on the right dike.  It was really fun and not at all scary.  By the end of this pitch I was feeling much more confident.

The crux fourth pitch begins with a tricky mantle to reach a bolt, then some commiting 5.9 smearing to clear a bulge.  Above this, the dome is covered in a sea of shallow, polished knobs.  The sun came over the top of Pywiack Dome just as I pulled onto this section, and all the knobs were highlight by sun and shade.  At this point I began my search for the key bolt.  All the shadows on the rock made it impossible to pick out a tiny steel hanger.  Suddenly it occured to me that, considering the history of the route, I should be looking for a free stance, not a bolt.  I immediately noticed the only scoop in the entire face and quickly located the bolt five-feet above this stance.  I gingerly made my way to the bolt and clipped.  By this point I was a granite slab-smearing master and I made quick progress over the glassy glacier polish to the top of the slab.

After a quick rap and easy scramble back to the car, we had a snack and then headed for Lamb Dome.  Our next objective was On the Lamb, a totally unique climb featuring a 500-foot dead horizontal traverse, the ideal terrain for ARC training 🙂

Beginning the horizontal traverse. Once you turn this corner the ground drops away and the route becomes fantastically exposed.

The route starts with a couple hundred feet of scrambling, fourth class and low 5th class climbing to reach an amazing horizontal crack about 300-feet off the deck.  The crack follows a heavily featured dike, offering some of the best chickenhead jugs I’ve ever seen.  Most of the time there are enough footholds that the climbing is super fun and casual, but every now and then the footholds disappear entirely, leading to a hasty dash to the next good stance.

Its always a good idea to ditch the big gear early; looking for a nice pod to deposit my #8 Flexcam.

The crux for me was certainly protecting the traverse for the second.  I wanted to get gear in every ten feet or so, but the crack is surprisingly uniform (right around 3/4″ with only a few variations) and the pitches averaged almost 150′ in length.  My rack wasn’t very deep, so I had to be creative and I spent a lot of time fiddling with nuts.

By the time we reached the end of the fourth pitch we had done enough traversing to last us for a few years.  We stopped on the descent to watch a party climb Oz, a classic 10d crack climb, then headed to the General Store for It’s Its.

The next day was designated for Frolfing (Frisbee Golf).  Chris is a 5.13 Frolfer.  He’s got a monster drive and he’s a very good putter.  I’m about a 5.11 Frolfer I would guess.  We played a really fun course near Sonora that follows an old irragation canal through a cedar forest.  We played two rounds, which I will summarize thusly:  The course crosses the canal twice, so in our two rounds I had to throw across the canal four times.  I managed to throw my disc in the water twice.  Even Chris’ dog Hera only fell into the canal once. Fortunately we were able to extract both Hera and my frisbee each time. 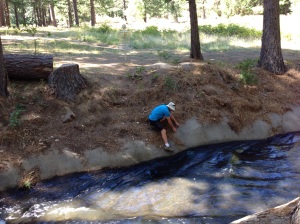 Putting my smearing skills to good use.